The river Thames collects the rubbish and sewage of London’s residents. Mudlarks are poor children who survive by scavenging for that rubbish in the mud at the river’s edge. They work in crews, each with its own territory, each with its own leader.

In honor of my website redesign (and because the affordances of WordPress make me feel guilty for not blogging, YES I know that’s silly but whatever) I’ve decided to institute a series of posts on the “Story Behind the Story” of some of my favorite published fiction. While there are lots of great stories I could tell, I figured this series could only start with Mudlarks, my first publication. 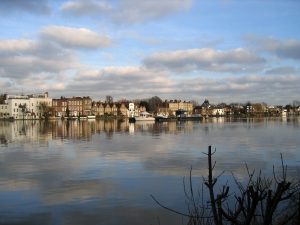 A lot of writers workshops have a particular story exercise: the 24 hour story. Participants have approximately 24 hours (a bit more if they don’t mind sleep deprivation) to write a short story from start to finish. I had only just recently moved from London back to the States, and one of the many things I missed was the river Thames. And I knew about the historical mudlarks, mostly children and the elderly, who eeked out survival by scavenging on the banks of the river. Okay, great, but where’s the speculative element to go with it? Edmund Schubert – then editor of IGMS – happened to be in that workshop with me and while we were working on brainstorming he said, quite casually, “You know, her magical powers ought to be related to the river somehow.”

That was the missing piece that made the entire story – indeed the entire world – fall into place. I spent 24(ish) frantic hours writing. At about 2am I almost killed off the main character just so I could go to bed (do not do that, that is a bad reason to kill off your main character) but I persevered and finally around 5am managed to finish the first draft of my story at a “mere” 8,000 words.

When it came time to critique my story, my fellow workshop participants had very valuable advice to give me (especially about not rushing the ending because I wanted to go to bed). I knew substantial revisions would be necessary before I could even think about submitting this story to markets and I was mentally prepping myself to do so even as the critique session ended… with Scott Card telling me that, even in this form, any editor would be a fool to not snatch it up if it crossed their desk.

Readers, Edmund was not a fool. I spent several frantic weeks revising and several more months wondering if it was all a dream, only to be absolutely thrilled to finally see my story published with an amazing illustration to boot (the illustrator even blogged about the artwork). While the full story is behind a subscription paywall, you can check out the beginning (and other great stories in the magazine’s free issue) at http://www.intergalacticmedicineshow.com

My former ISP and I have had a parting of ways… snazzy new site design coming very soon! In the meantime, have a photo of a very hard-working cat. 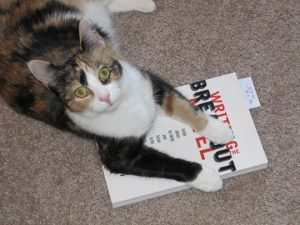